* Some rental car suppliers may charge a credit card fee for amounts payable on arrival.

The good news is that you'll find them here and can easily compare their best deals.

This means you don't have waste time trawling the Internet looking for options. Or have to pay exorbitant walk-up prices at the airport rental counter.

"On-Airport" means these rental companies have check-in desks within the airport terminal.

The big advantage of this for you is convenience and speed. Once you've checked in you can jump in your car and get going. No waiting around for transfer vans.

But it does come at a cost. The fees are higher than off airport rental companies to offset the costs of being at the airport.

If you're arriving on an international flight you'll find rental counters next to the arrivals area on the ground floor of the international terminal.

Travellers on domestic flights can find counters are located on the ground floor of the car park building opposite the domestic terminal.

Use our price comparison search tool to find the best prices for these on-airport car rental brands at Auckland Airport:

"Off-Airport" companies don't have check-in desks within the airport. This means you'll need to make your way to their car hire depot to check in and collect your car.

Most provide free shuttle services and will collect you from the terminals. This gets arranged when you make your booking & you'll need to let them know when you've arrived.

Off-airport car hire companies aren't as fast or convenient as using on-airport car rentals. But the big advantage is they are usually much cheaper.

Use our price comparison search tool to find the best prices for these off-airport car rental brands at Auckland Airport:

I tried Mates Rates after reading some positive reviews. Was not disappointed! You can spend a lot of time searching for a rental car, but found the best deal there

Best deal we could find after looking at all the rental car websites.

Easy, I had no problems at all. Prices seemed to be ok. I didn't check others. Definitely recommend.

Best car hire rate I could find. Recommended to a friend and she said same.

Very easy to use. Really good specials for a run around car. Would recommend.

Easy to compare the different rental companies in one place. Lots of choice which is great. Prices seemed cheaper than other sites including when I looked at booking direct

Glad I found your site – we left things to the last minute and couldn’t get a car at a price that made sense. Problem solved!

We left everything to the last minute and were having trouble finding a car. Then we found your site and got a car in Queenstown at a decent rate. Will tell our friends!

Easy and efficient. Competitive prices with good choices. Worth a try.

We booked ahead from Germany. Prices very reasonable, and a good choice of cars. Saved us time and money — would use again.

Thanks for making things easy. Found a 4WD for much less than we had seen on other sites, and booked it — no worries.

Compare prices of on-airport and off-airport brands. If you're not in a big rush, hiring a vehicle from off-airport car hire depots can result in big savings.

But you will have to take extra time with the shuttle transfer. Transfers are usually free, but limited to opening hours, so check when you book.

Auckland is a wonderful place to visit and has regularly been rated as one of the top cities in the world to live.

Visitors are often surprised at how large and spread out the city is, given its comparatively small population by world standards of just over 1.5M people.

There are plenty of great things to see and do, but getting around without a car can be challenging. Taxis are expensive and public transport currently leaves much to be desired.

If you're on a limited timeframe and trying to pack in as much as possible into your time in Auckland, relying on buses or trains will not suit most people.

Having a rental car to get around gives you the freedom and flexibility to make the most of your time exploring Auckland and surrounding areas.

Return with a full tank

If you return the car with the tank not full then the car hire company will charge a high price to top up the tank. These charges can be excessive, such as a $2.50 a litre surcharge on top of the fuel cost. Not a nice surprise to later find this charge on your credit card.

There is a 'Z' brand petrol stations open 24 hours right at the airport. 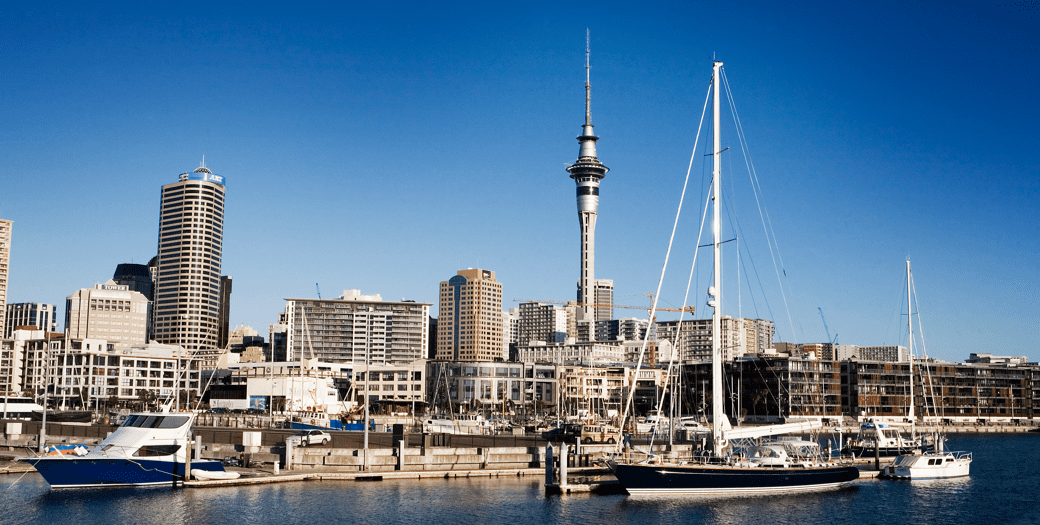 A rental car gives you the freedom and flexibility to make the most of your time exploring Auckland and surrounding areas. Here are a few of the many attractions around Auckland you might like to consider checking out. For more ideas, check out the Tourism Auckland website.... 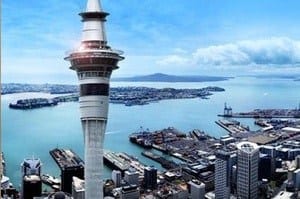 Standing in the heart of the city, and boasting a myriad of entertainment options, restaurants and even a casino, the Sky Tower is a must-see attraction for all visitors to Auckland. The tower itself was opened in 1997 and soon became Auckland's premier tourist attraction, with over half a million visitors per year.

At well over three hundred metres high, the tower offers 360-degree views stretching up to 80 kilometres from its three spacious viewing decks, which come complete with viewing telescopes, information panels, and glass flooring for more courageous souls. Perfect for waving down to those who chose to stay below rather than brave the heights!

While on the subject of adventure-seeking, those of a particularly daring disposition may be interested in the Sky Jump, a bungee-style jump from near the tower's peak, or the Sky Walk, an outdoor trek around the tower's 192-metre-high pergola. Visitors looking for a slightly calmer kick can visit the tower's adjacent casino, which houses over 1600 gaming machines and 100 tables, catering for high-rollers as well as those just seeking a cheap thrill. If you're seeking to unwind after a long day of travel the Sky Tower also plays host to ten bars, ranging from the relaxed The Nation's Clubroom sports bar to the more refined X.O.

Hungry patrons can take their pick of a dozen restaurants, with a mix of casual and fine-dining options available. One highlight is Orbit, a 190-metre-high restaurant situated inside the Sky Tower, which gradually rotates giving diners a fantastic opportunity to take in Auckland's views as they enjoy some of the finest cuisine the city has to offer.

The Sky Tower is located in central Auckland, with ample parking and accommodation available at the tower itself. It is a must-see Auckland attraction and deserves a place near the top of your priorities list. 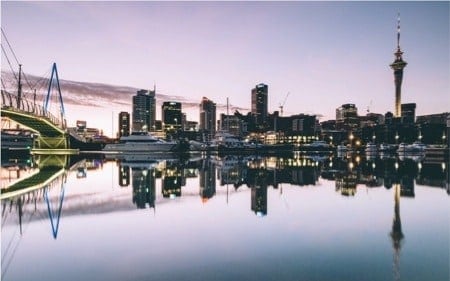 Viaduct Basin is a lively dining and entertainment precinct on the edge of downtown Auckland’s stunning waterfront with a backdrop of breathtaking super yachts. As well as a fantastic selection of bars and restaurants to choose from, it’s also the starting point for lots of Auckland’s exciting harbour activities.

There’s also the fascinating Maritime Museum where you can learn about New Zealand’s rich maritime history.

Wander over the lifting Wynyard pedestrian bridge to Wynyard Quarter, Auckland’s newest waterfront precinct. Here you’ll find family-friendly dining, play spaces and, in the summer, markets and an outdoor cinema. Adjacent is the Auckland Fish Market. As well as being a functioning fish market, you’ll find Auckland’s only dedicated seafood cooking school, a range of places to eat, plus New Zealand wine tasting.

Close to the Viaduct Basin is the Auckland Ferry Terminal where you can hop on a ferry to visit world famous Waiheke Island. A must do when visiting Auckland. 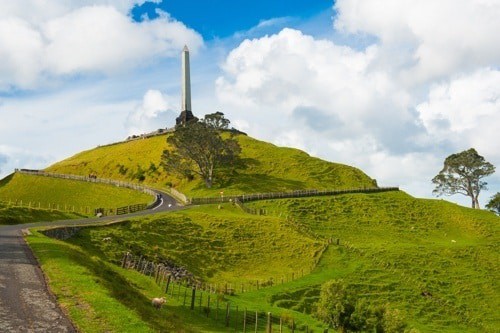 You won’t find a cheaper destination in Auckland than One Tree Hill, an extinct inner-city volcano surrounded by one of the city’s finest parks.

One Tree Hill (or Maungakiekie in Maori), is a 182-metre-high peak located just outside the central city. The hill is visible from many city suburbs, particularly the prominent obelisk at its peak. The ‘One Tree’ for which the volcano is named no longer stands on the hill as it was cut down in protest in the year 2000, leading to the peak being colloquially referred to as ‘None Tree Hill’.

The peak is an easy 15-minute drive from downtown Auckland, and well-paved roads allow travellers to drive directly to the summit. However, those looking to tone up will find the steep ascent to be a fine walk, which will make the magnificent views of the city all the more rewarding.

The view from the peak is quite different to that offered by the Sky Tower, as Auckland’s southern suburbs and central city are more clearly visible. The peak is surrounded by Cornwall Park, as well as the One Tree Hill Domain, creating a 220-hectare public park, which is free to visit.

As well as a multitude of native trees and an 88-hectare farm, the park is home to a cafe and a restaurant, perfect for a snack, lunch, or even brunch – the Aucklander’s favourite meal. The park also contains Auckland’s Stardome Observatory, with its two telescopes and planetarium. Access to the park is allowed between 7am and dusk, seven days a week.

The park is most easily accessed from the Pohutukawa Drive gate, just off Green Lane West. 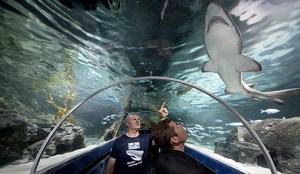 Just a ten-minute drive along the waterfront from downtown Auckland, Kelly Tarlton’s is an immersive aquarium experience that is sure to be a hit with the whole family.

Kelly Tarlton’s was constructed in 1985, making it one of Auckland’s more venerable tourist attractions. The aquarium, which is, in reality, more a fully-functional sea-life museum, was constructed from the remnants of a sewerage system. But don’t worry, they made sure to clear it all out before putting in the fish and opening it to the public, so you won’t end up with mucky feet!

The aquarium was an early trendsetter as it was one of the first facilities to house curved tanks and make use of conveyor belts, which allow visitors to stand and gape in awe as fish, stingrays and even sharks gently glide over their heads.

More recently, Kelly Tarlton’s became home to the Antarctic Ice Adventure, a full exhibition of polar marine life, including a recreation of the hut inhabited by famous explorer Captain Scott, and an encounter with real penguins.

Kelly Tarlton’s offers a deep educational experience for young visitors and old, as well as a cheap, well-stocked gift shop. Located at 23 Tamaki Drive and open 9:30 to 5:00, seven days a week, Kelly Tarlton’s is an ideal stop for families exploring Auckland.